Haven't Tried Kangaroo Meat Yet? The First Step for Healthy-Living

When hearing the word “kangaroo”, the first thing that comes to mind for many people is Australia. Actually, it’s not rare at all to see people eating kangaroo meat in Australia. In Japan however, kangaroo is pretty uncommon, but compared to beef, pork, and chicken, there’s a lot more nutrition in kangaroo meat. Today we’ll be introducing kangaroo meat which is expected to prevent lifestyle diseases.

Currently in Japan, heart diseases and metabolic disorders are increasing due to food containing a lot of fat and sugar. On top of that, daily stress levels are high. It’s said that a poor daily lifestyle is the cause of such  diseases and in 2017, the number 1 cause of death in Japan was cancer, followed by heart and lifestyle diseases. From research, you can tell daily eating habits are an important part of everyday life. Recently, there has been a growing interest in food, and we often see food pyramids where people can choose a balanced diet at first glance, and “special health food” logos for nutritional food. With that being said, many people think that eating meat would make them gain weight or it is not good for losing weight but there are many points of which we would like to recommend kangaroo meat.

By incorporating moderate exercise, and kangaroo meat which consists of high protein but is low in fat, it’s possible to create a healthy body with an outstanding metabolism.

Tasty Wild Kangaroo and its Nutrients

Wild kangaroos are found in the vast land of Australia. Kangaroo is known for its low-fat and high-protein thanks to the great environment of Australia. Obviously, because of this, kangaroo meat is free of additives etc. However, because they grow up in the wild, some people may be worried about the safety of the meat. In Australia, safety and hygiene control standards are very strict and thus, the meat is very safe. Hopefully in the near future, high quality and safe kangaroo meat will gain its much deserved attention as the “fourth” meat after beef, pork and chicken in Japan!

A Guide to Kangaroo Cuts! Delicious Recipes to Jump Start a Great Meal

Kangaroo meat is lean, rich in flavor, has less a gamey taste and is very tender. We’ll be introducing various cuts and recommended recipes!

Striploin loin is the meat in the back part of the spine, and is well-balanced in fat. This is what gives it that savory taste. We recommend a red wine kangaroo stew. 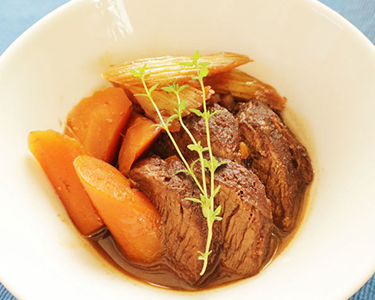 Rump is gaining attention due to recent health-conscious trends. Rump is close to the hindmost area. The tender red meat and rich taste is the feature of this cut. We recommend using the savory rump as minced meat to make a unique dish, such as tacos using fresh vegetables and minced rump with potherbs and spices. 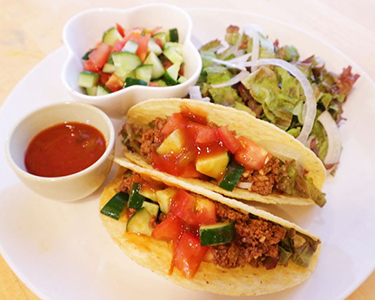 The thigh is a section that is a commonly used muscle, and has more red meat compared to the rump with little fat. We recommended "tataki" in Japanese or “searing” to fully make use of the beautiful lean and soft thigh meat. Kangaroo meat has a lot of moisture and the liquid in the meat is easy to drip. However, by marinating kangaroo meat into sake, it prevents dripping. 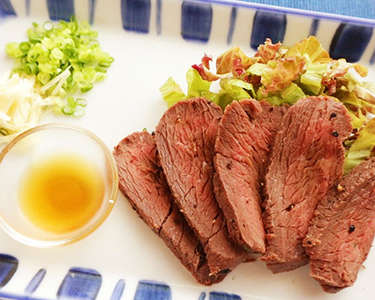 Kangaroo meat may be a savior to prevent lifestyle-related diseases. Currently it is still an uncommon meat, but you can enjoy  healthy and savory dishes. Why not give it a try now today!